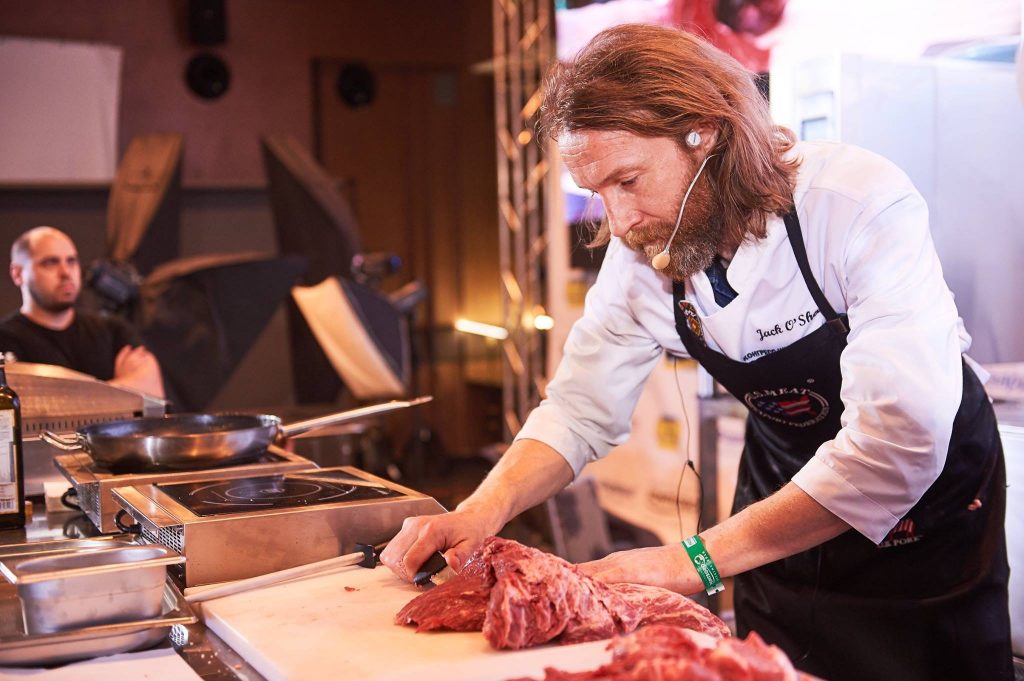 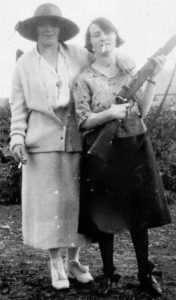 Unbeknownst to me, my butchery training with my father, Dairmuid, began about as soon as I could walk. Rural Ireland in the 1970s was wonderful but rough. The family abattoir was, literally within spitting distance of the house kitchen and it bore absolutely no resemblance to the clinical modern version of a slaughterhouse, which is not to say that it was worse. In fact, despite its massive 19th-century granite walls and flag stone floor, I believe it was superior.

Animals were dispatched in the cooler evenings when Dad and his men were finished their day jobs at the shop or otherwise. The throughput was tiny compared to modern killing houses, but because of this the animals were calm and didn’t know what was happening until the sobering deed was done. I learned early that this was THE most important link in the chain, as a stressed or upset animal produces bad, or what we called then ‘dark cutting’, meat, which modern factory production often disguises in canned meat products such as corned beef.

Another wonderful advantage of the old ways was the care taken to clean and dress the carcass by hand and warm cloth as opposed to a power hose or the acid cleaning methods of modern industry. I can still recall how the slow night chill produced a texture as if one were cutting through butter. Even the lambs were flank dressed with their own O’Shea family blood and knife mark insignia to add colour and a personal touch to the window display when they were hung proudly in the butcher shop later that week. Other butchers in the town also had their own knife marks, which I suppose was a medieval form of copyright-so much cooler than the present form. It was like meat art akin to Rembrandt’s famous worship of the carcase in his 1655 Flayed Ox Oil. What a dude.

During the Christmas season, turkeys also went to heaven in this chill house, as real butchers always insisted on doing their own so they could be hung properly and New York Dressed for the window in time for customers to collect for dinner on the 25th. I would marvel at these strange, exotic animals that reminded me of Davy Crockett and Daniel Boone and American TV, but I hated the feckers because a group of them attacked me when I was six and slipped running through the shed one night. It felt like being pecked by a boat load of ostrich. They must have known what was coming.

Sadly, Ireland joined the EU in the 70s, and everything changed when we began nonsensically importing meat from Brussels. Suddenly, many local meat masters were shut down for crimes such as cutting on a wooden block rather than a nylon one or because their ceiling was too low or some other shite. We moved to the big house in ’79 and built a new slaughterhouse on our land, but we lost the close connection that we had previously. Costs increased significantly and eventually we became like the others, outsourcing the art of the kill to the cartel, as small volume meat businesses are of no interest to big government. Sad as pasteurised cheddar. Oh well.

The second most important link in the chain of meat production is the one that comes before they see the slaughterhouse. It’s the art of farming and caring for livestock and animals. It requires a kind but slightly detached heart. Historically, you know, butchers were never allowed to perform Jury Service. Perversely, I adored cattle, and being the weirdo that I am, as a child and teenager I spent hours every week talking to them. We had to feed them in winter, fence them in summer, and select and check them on a daily and weekly basis for their ultimate appearance in the butcher’s shop on Patrick Street.

My father had the eye and manner of a Sicario, but he would go nuts if a herdsman or worker hit the cattle or overexerted the wavin pipe during selection at market or on the farmyard because he knew it would mark or bruise the muscle or upset the animal. Fortunately, people tended never to feck around with him because they knew what a wonderful cattleman he was – an incredible pro with his stock. Growing up, it always seemed to me that farmers greeted him with reverence at the mart. It was uncanny how he could practically count the number of prime cuts running around on the farm before D Day came.

The sharks would watch what he was buying and often run the price up as that special beast came in the ring. Fortunately, we have wonderful cattlemen on the other side of the family as well with the Ryans and the Kenneallys, so his auxiliary buyers were great. There was also the local network of cattle masters who shopped with us in town and in Tipperary, which is like a cross between the Pampas, Queensland and Texas-only more cowboys, I reckon-but definitely an equally steady supply of young quality cattle.

Beef cattle are more like a classic Irish Hunter or Cavalry Charger as opposed to the fine-tuned Thoroughbred, for which Tipperary is also justifiably world renowned. Coolmore and Coolbeef. They thrive with good grass, clean water, and a comfortable environment, especially in temperate, rainy Ireland. Its cow paradise, particularly for the native British breeds, which as we know are the best on the planet. I still remember all of the magical eating experiences I’ve had from these breeds in the steakhouses of New South Wales, New York City, Buenos Aires, Rio de Janeiro, the Cape and Nebraska, not to mention here at home. They all share the same common denominators: great farmers, happy cows, and passionate chefs. With these three ingredients, you can’t go wrong. It’s ALL good.

I would marvel and wonder – like watching Clapton, Page, or Beck playing the blues-as my father felt the body of the beast in the crush, feeling the back (loin), top of the tail (oxtail), or ribs (flank) for fat cover and readiness before giving a Yea or Nay with a dismissive wave of his powerful hands. Or, he’d nod disappointingly; “she needs another week,” he might say as he calculated simultaneously what to do about the as-yet-undead Sunday Roast for Group Captain Beamish! I eventually got it, but it takes years and really only makes true sense to a butcher who’s also a farmer. It rarely seems to work in reverse, as my visits to many farmers’ markets over the years have proved to me (but I’m a fussy git)!

I could write a whole book on hanging and maturation (and I might well do that one day), but for now, it should suffice to say that I think it’s become a ridiculously prissy and much too mysterious affair. For starters, bear in mind how long fridges with temp control have been around. In the old days, they didn’t have any so, according to my grandfather, cattle were dropped on Wednesday night, in the shop for Thursday (which was market day), and all sold by Saturday! The only protection in summer was those thick granite walls, the hungry hard-working locals, and the continually bubbling stew pot-the big, black, cast iron beauty found in all Irish farm dwellings.

Dry ageing? Quoi Monsieur? Beef could hang in colder weather, sure, but this wasn’t necessary in practice. What’s the point in dry ageing stewing meat? As in Paris, the best tartare is made by hand chopping the freshest charolais; Beirut’s finest kibbeh is only done with today’s fresh-killed lamb, etc. 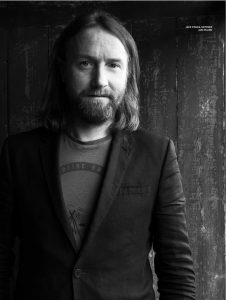 The gauchos and cowboys of the planet never hung beef. Instead, they selected and often sniped a young animal that never knew the bullet was coming, thus acquiring wonderfully tender and fresh meat, especially when twinned with the parilla or a hardwood grill in the bush. Rooikraans for the Boers, and Québracho for the Argentines, for example. Can’t bate it! The sirloin and fillet almost always went to the retired colonel, canon, or lawyer for Saturday or Sunday dinner parties, and in urgent cases over a holiday such as Christmas, it was preserved in the ancient vacuum pack that is beef dripping. More on this later….

My ancestor, Edward O’Shea of Borrisileigh, Tipperary, retired from the meat game in 1730. He was noted in local Parish records for his butchery and most likely would have slaughtered animals for local farmers as well as supplied the local big houses with his product. Later generations in the family were victuallers, as distinct from butchers, which meant they supplied the Army with meat as well and perhaps even contributed, like most Munster Butchers did, to the enormous export trade for corned or pickled beef to feed our soldiers around the Empire. Around 50% of the British Army was Irish throughout the 19th century, so this was a great contract to have, and my hometown of Templemore was a very important garrison on the road to Cork, which supplied ships and the wider world.

Tipperary farmers and butchers, despite politics and famine, were relatively prosperous men. In fact, Templemore was designed and built with an enormous town square so local regiments could parade and project power, and then local farmers could sell their wares at the famous town market. Once while waiting at the train station, my father explained to me how the beautiful and noble granite warehouses would be loaded with cattle bound for Smithfield in Dublin and then bought and sold again and sent-like most Irish beef even today-to the once-famous Smithfield Market in London. It’s ironic that I once also brought my Irish beef from Cork and Tipperary to the unit in London’s Smithfield Market, albeit by refrigerated truck and not by what must have been a far-from-romantic train ride for those poor beasts of old.